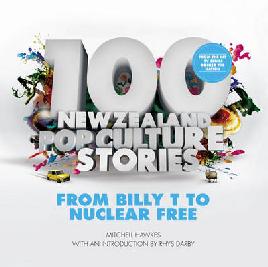 Some things are just quintessentially Kiwi — items, objects, images and people that immediately remind us of who we are, of our essential Kiwi-ness. This page links to items at your library and websites that will help you explore what makes New Zealanders unique.

Te Ara (the Encyclopaedia of New Zealand) defines kiwiana as The quirky things that contribute to a sense of nationhood and lists such objects as the Buzzy Bee toy, pavlovas, pāua shell ashtrays and black gumboots.

In early 2007, the news that the late Fred and Myrtle Flutey’s collection of shells at their pāua shell house in Bluff might migrate from its Southern home stirred lots of interest in kiwiana. The pāua house has been visited by thousands of tourists, and the Fluteys starred in a television ad. It has now been moved to Canterbury Museum. New Zealand pāua (known as abalone in other countries), are all unique species found only in New Zealand, and are distinguished by their brilliantly coloured shells.

The cartoon strip Footrot Flats continued the black singlet and gumboots theme as Wal, Couch, Rangi and the Dog grappled with the meaning of life in the crumbling backblocks.

Billy T. James also gave the black singlet (and yellow towel round the neck) an airing and, with his characteristic chuckle, put his finger right on the tricky bits of the Māori Pakeha relationship as well as tackling most of the sacred cows of Kiwidom.

More recently the boys from Bro Town have turned their distinctive brand of Polynesian urban humour on the country. Outrageous Fortune has also shown us we can laugh at ourselves.

Our native wildlife conjures up many images and sounds which are indelibly linked to our view of ourselves and others’ view of us. Our wildlife icons include:

Many New Zealand brands can be said to be quintessentially Kiwi:

Barry Crump brought the phrase Good Keen Man to the fore with his books of hunting in the bush. For the epitome of a Kiwi sporting hero you can’t go past Colin “Pinetree” Meads – tough but fair.

The capable Kiwi woman who could turn out a pavlova to perfection, run a household and turn a surplus of fruit into delicious preserves turned to Aunt Daisy for inspiration. Aunt Daisy ruled the airwaves through the 1930s, 40s and 50s with her daily radio programme of household hints, recipes and general advice. Her shows always began with a distinctive Good morning everybody, good morning, good morning.

Fred Dagg took a more laconic approach – his Ah, yeah, gidday and deadpan delivery neatly skewered the stereotypical Kiwi farmer and sent black singlets and gumboots into the national wardrobe along with jandals and swanndris. Fred’s creator, John Clarke, has continued to have a great career as a humourist in Australia.

Another true Kiwi icon is the bungy jump and the man behind it — A.J. Hackett. For two decades he has satisfied the thrill-seeking urges of locals and visitors alike as people queue up to jump off a bridge with a piece of elastic strapped to their legs. He is also responsible for introducing The Ledge Urban Swing, an innovative new swing that has people sailing 400 metres over Queenstown.

What we all consider to be quintessentially Kiwi is constantly changing. As our national identity and culture continues to develop, so do the symbols and elements of that culture. Gothic New Zealand: The Darker side of Kiwi Culture explores the idea of ‘gothic’ in New Zealand culture. From Martin Edmond’s abandoned houses, to Ian Lochhead’s Victorian corrugated iron structures, to Otis Frizzell’s tattoos, from Peter Jackson’s movie-making to ghost paintings — there’s plenty of it. As the editors suggest, gothic is endemic to New Zealand’s self-representation.

Beach, BBQs, Christmas, family time and a well deserved Summer break (even if it is just the statutory days) are on the horizon, can you believe it!?  And as we head into a new year, it is a END_OF_DOCUMENT_TOKEN_TO_BE_REPLACED

A song to celebrate our nation, our landscape, our uniqueness, our language and our people... END_OF_DOCUMENT_TOKEN_TO_BE_REPLACED

Watch this video to learn how to make Samoan Coconut Buns. OMG these are good, a recipe from our Pacific neighbour and some sweet memories from my childhood! Check out our Kiwiana foodie END_OF_DOCUMENT_TOKEN_TO_BE_REPLACED

COVID 19 UPDATE - There are still significant delays with international shipping, couriers are being prioritised over International Air freight. We thank you for your patience and understanding. Kia Kaha New Zealand! Dismiss